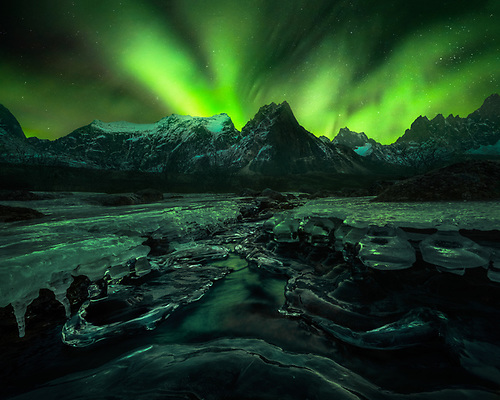 "Winter has always been special to me as a barren darkness that gives birth to a verdant future beyond imagination, a time of pain and withdrawal that produces something joyfully inconceivable, like a monarch butterfly masterfully extracting itself from the confines of its cocoon, bursting forth into unexpected glory." –Gary Zukav

"Like any traveler, I'm always looking for those experiences that are almost unique to any place, and watching films around Alaska of the skies in winter made me want to taste those unworldly showers of light in person." –Pico Iyer

I made my first trip to the Ogilvie Mountains in 2012, and for the first time photographed (and watched) the aurora borealis dance across the sky, above some of the most impressive peaks and spires I have ever seen. A still photograph can never capture the dynamic nature of the northern lights. On a good night, one is treated to a 360 degree view of dancing green, red, and magenta hues, all beneath a clear, starry sky. It was fall then, with a beautiful blanket of autumn tundra across the ground. For over 5 years, I had planned to return in winter, when the fall colors had faded, and fresh snow, frozen lakes, and white peaks imported a distinctly different character to the landscape. The area was barely recognizable from what I remember, but it was beautiful. The nights were cold. Very cold. The rivers, streams and lakes were frozen, requiring several hours a day boiling snow for drinking water. I spent 7 nights on a helicopter-in, helicopter out backpacking trip through the range. I stayed up at night in wind chill conditions of -15 watching the most breathtaking natural phenomena display right in front of me. I camped at the base of some of the world’s most visually impressive peaks. I slept through blizzards and hiked through knee deep snow, over slippery talus rock, across frozen rivers and through dense brush. I captured photographs I consider some of my most visually appealing, but that are also more meaningful to me then most I have ever taken.

BACK to previous page